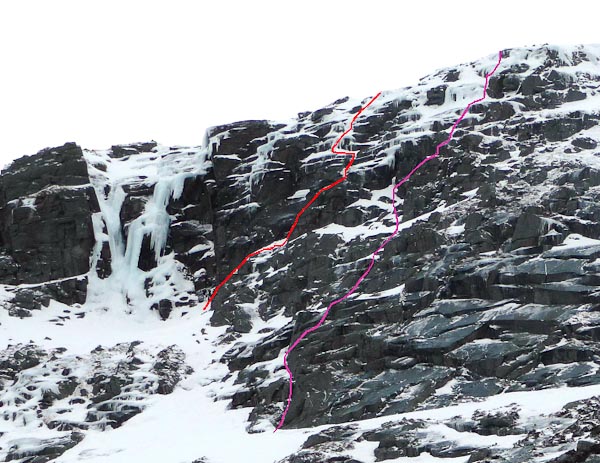 Andy Nisbet is unstoppable at the moment, roaming far and wide, and climbing good new routes all over the Highlands. Recently he made three additions to Plateau Buttress high on the right flank of Eagle Rocks in the Southern Cairngorms – Flanker’s Route (IV,5) with Duncan Tunstall and then Vanguard (III) and Fairytail (III,4). Here is his story:

“Flanker’s Route [January 2] was intended to be a winter ascent of the summer V Diff on an area of buttress with no routes. I had climbed it before in summer but only found a Severe line and quite a slabby one, so wanted ice for winter. After the thaw, ice was starting to appear in several places so it seemed like a good option. I would have started higher up under The Drool but Duncan suggested a ramp line. We followed the line of least resistance mostly in icy grooves to reach thicker ice higher up (IV,5). Afterwards, our description seemed to fit the summer description to that was what it was named.

Three days later [January 5] I went back myself to climb the long intermittent icefall which came up from A Likely Story Slab to finish through the left end of Plateau Buttress. This gave a pleasant Grade III, called Fairytail. There were a couple of steep sections for the grade, but since they were avoidable and the ice very thick, the grade III,4 seemed right.

On the way up, I couldn’t help looking over towards Flanker’s Route and seeing an icy ramp which oddly led through the area of a summer HVS, Vanguard. Despite tired legs, I had to give it a go, and it not only did lead up through some very steep ground with little difficulty, but just connected with the thick ice which covered the top of the buttress. Straight up would have been easier but I couldn’t resist traversing on to ice which led up from the lip of the big overhang on this buttress. It would have made a great photo if I hadn’t been alone!”