Early Repeat of The Prophet

Posted on December 26, 2010 by Simon Richardson 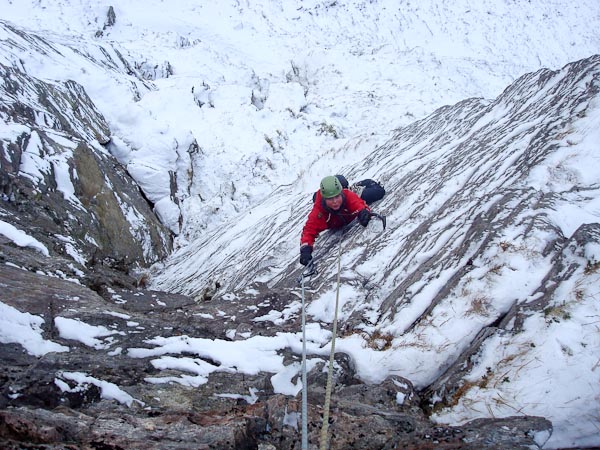 Shauna Clarke making an early repeat of The Prophet (VI,7), Beinn an Socach. It is not known whether this route has seen any repeats since it was first climbed in January 1991. It was thought to be a more technically difficult and bolder undertaking than the neighbouring modern classic, Messiah (VII,7). (Photo Dan Moore)

On Saturday December 18, Dan Moore and Shauna Clarke made an early ascent of The Prophet (VI,7). This rarely climbed route was first climbed by Graham Little and Kev Howett in January 1991.

“It doesn’t look like it sees many ascents,” Dan told me, “but it has varied and interesting climbing. There are some very tenous moves on the second and fourth pitches with some sketchy gear! The third pitch has a strenous pull through a roof but has good protection. Having climbed Messiah yesterday [December 23] I would say the Prophet is a trickier and more serious proposition. Though not as sustained, it has technically harder moves. With the less than adequate gear in places wondered if the grade of VI,7 was a consensus? Messiah was safer and never too difficult – in current condition at least!”

Simon Richardson is a passionate Scottish winter climber
View all posts by Simon Richardson →
This entry was posted in Repeats and tagged Beinn an Socach, Dan Moore, Paula Clarke. Bookmark the permalink.

4 Responses to Early Repeat of The Prophet