End of Season Wrap Up 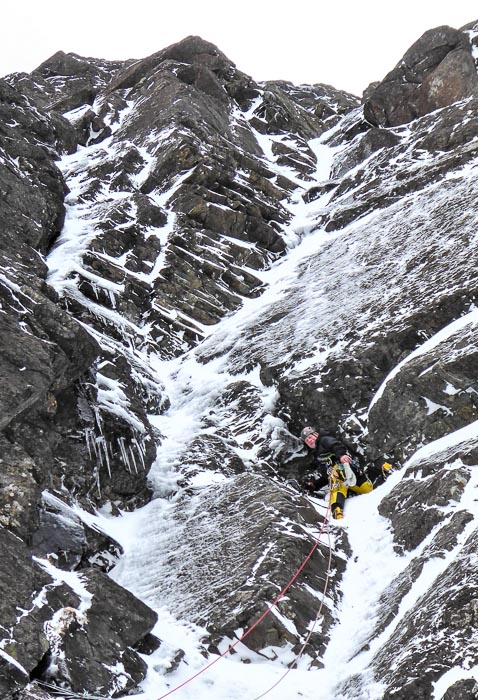 Mike Lates on the first ascent of Christmas Comes but Once a Year (IV,4) on Sgurr nan Gillean on Skye. This superb-looking route was climbed back in February immediately following Storm Ciara. (Photo Lucy Spark)

With settled high pressure and cool nights, winter climbing conditions have looked superb over the last month, but with the hills close due to Coronavirus, it is all been rather academic. However. I thought I’d take the opportunity to catch up on some new additions that were missed from earlier in the season, and cover the final days leading up to lockdown on March 22 when some significant new routes were climbed.

Mike Lates and Lucy Spark climbed the finest new route of the winter on Skye on February 13 when they made the first ascent of Christmas Comes but Once a Year (IV,4) on Sgurr nan Gillean. This follows a beautiful icy groove on the left side of High Crag. “As with all ice routes in the Cuillin this route needed the right sequence of storms, minor thaws and refreezes to form,” Mike told me. “Real credit goes to Lucy for following all day in microspikes.” (Mike forgot his crampons!) Mike and Lucy also climbed In Pinn Icefall Lite (III,5) on March 6, which climbs the prominent ice sheet to the right of In Pinn Fall.

In the Northern Highlands on January 19, Roger Webb and Neil Wilson found Escape Gully (II) on Creag a’ Chaorainn on Sgurr Nan Clachan Geala. This starts 100m right of the Last Lap and is the only gully on the face. On March 4, Adrian Gaughan and Jo Polak ascended Saltire Gully Right to Left (II) on Beinn Alligin. This follows the right to left gully of the two intersecting gully lines on the South Face. A week later on March 13, Mark Robson and I had a fine adventure on End of Days (VI,6) on An Ruadh-Stac. This takes an unlikely six-pitch line taking in all three tiers to the left of North Face. On March 19, Tim Miller and Jamie Skelton made the first winter ascent of The Modern Idiot (VIII,8) on Beinn Eighe’s Eastern Ramparts. And finally on March 22, Jamie Hageman climbed Feadan Breun (II), the prominent gully cutting the north-east face of Sron na Breun, a northern outlier of Gleouraich.

There were some good additions on Ben Nevis. On Creag Coire na Ciste, Dave Almond and Jack Brooks made an early repeat of The Sorcerer (VII,8) on November 18 adding an exciting Variation Finish (VI,7). Further right on February 5, Mark Robson and I squeezed in Piccadilly Circus (V,6), the well-defined rib between Central Gully and Central Gully Right-Hand. On Secondary Tower Ridge, Will Rowland, Nathan Adam added Dry Birds (V,6) on March 11. This follows the left facing corner just left of the steep cracked wall of Watery Fowls and gives good technical mixed climbing.

In the Southern Highlands, James Seaman, Peter Nellist climbed Door Step Route (III,4) on February 28, a winter ascent based on Central Rib. Earlier in the season on November 14, Sophie Grace Chappell and I visited Coire Ban on Meall a’Choire Leith and found Ace In The Hole (III,4) and Wild Card (IV,5). Unreported from Day 5 (February 27) of the Winter Meet was the first ascent of A Very Naughty Boy (VII,8/9) by Tim Miller and Damian Granowski from Poland. The route takes a left-trending line across the steep wall to the right of False Rumour Gully finishing up The Enemy Within. The only unreported new routes from the Cairngorms are Onlooker (IV,5) and Looking Up (III) on the West Flank of Stac an Fharaidh. Both routes were climbed by Jonathan Preston and Mungo Ross on March 20.

Kevin Woods completed a winter Munro round in 97 days. This was a significant achievement given the high winds and stormy weather that characterised the season. A winter Munro round is a very rare event and had only been achieved twice before by Martin Moran in 1984-5 and Steve Perry in 2005-6.

One of the most notable events of the season took place on March 20-21 when Will Rowland completed the Greater Cuillin Traverse (starting up Pinnacle Ridge) followed by the Red Cuillin. He left Slichagan at 3am and reached Camasunary at 9pm that evening. He started at 7am next morning and reached Slichagan at 7pm. This is the first time this link up has been achieved in winter, and Will follows in his father Clive’s footsteps, who was first to complete the feat in summer conditions in 1982.

Route descriptions for all the new routes reported in this post, and others throughout the season, will be published this autumn in the 2020 Scottish Mountaineering Club Journal.

1 Response to End of Season Wrap Up