Defenders of the Faith – Second Ascent

Posted on December 6, 2011 by Simon Richardson 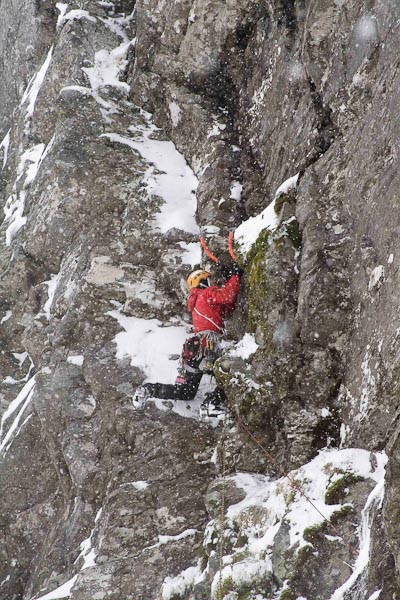 Dave MacLeod on the first ascent of Defenders of the Faith (IX,9) on Creag an Socach in the Southern Highlands in March 2006. This was the first Scottish Grade IX to receive an on sight first ascent. It was repeated today by Greg Boswell and Will Sim. (Archive Photo Dave Brown)

Breaking News – I’ve just received a text from Greg Boswell to say that he has made the second ascent (on sight) of Defenders of the Faith (IX,9) today (December 6) with Will Sim. This route climbs the overhanging right side of Creag an Socach above Bridge of Orchy and was first climbed by Dave MacLeod and Fiona Murray in March 2006. The route was an important landmark in the development of Scottish winter climbing as it was the first time a new Grade IX had been put up on sight.

“Really good conditions up there,” Greg told me, “with some ice around and frozen turf.”

After a late start, this season is now getting into full gear…

Simon Richardson is a passionate Scottish winter climber
View all posts by Simon Richardson →
This entry was posted in Repeats and tagged Creag an Socach, Greg Boswell, Will Sim. Bookmark the permalink.

2 Responses to Defenders of the Faith – Second Ascent